After many years of continued effort it appeared that Suzuki’s students could stand their ground amongst professionals. Although Suzuki’s first pedagogical aim is for a higher educational level and not the training of professional musicians, it cannot be denied that his school has produced many good musicians. Suzuki’s instrumental education is to be seen in the first place as a broader general education which, however, should be so well founded that it may serve as a basis for professional training.

Many foreign artists came to see Suzuki and his students, among them Arthur Grumiaux, David Oistrach, Marcel Moyse, William Primrose, Yehudi Menuhin, Alfred Cortot and Mstislaw Rostropovich. All of them were impressed by Suzuki’s work, and encouraged him to continue on his path.

One of the first great artists who came to visit Suzuki in Japan was Pablo Casals. Fritz Kreisler once called him the “king of the bow” (J. Ma. Corredor: Gespräche mit Casals), and George Enescu with whom Koji Toyoda had studied for two years said of Pablo Casals: “Casals will always be a teacher for all of us.”
Albert Einstein whom Suzuki often had met during his student years in Berlin also expressed his esteem for this unique artist and his respect for his character. He said of Casals: “What I admire most in him is his decent attitude…
He has understood clearly that the world is more in danger through those who tolerate evil or encourage it than through the wrongdoers themselves…” 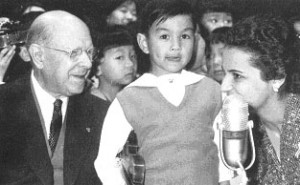 Pablo Casals with his wife Martita

Suzuki admired Casals wholeheartedly, the person as well as the artist. He owned all his recordings and, in particular, appreciated his characteristic tone and profound musical eloquence. Of course, Suzuki was more than happy to meet this great artist, and arranged a festive concert in his honour.

When on 16th April 1961 Pablo Casals and his wife entered the Bunkyo Hall in Tokyo there were 400 children aged 5-12 years on stage, waiting to greet the maestro with their music. The students’ parents and the teachers of the Talent Education Institute welcomed the couple with enthusiastic applause. As soon as Casals had taken his seat, the children started playing. The maestro listened attentively, and quite obviously was moved by the joyfulness of the playing children. Their naturalness, their fine and accurate performance again and again provoked him to enthusiastic interjections. Suzuki wrote about this historic moment in his book “Nurtured by Love”:

“His excitement reached its peak when the children played the Vivaldi concerto and then the Bach concerto for two violins. The maestro was weeping. His eyes were filled with tears, and his mouth was twisted with emotion. And when fifteen or sixteen children, who had been taught the cello by Yoshio Sato, a pupil of Casals’, played Saint-Saëns’ ‘Swan’ and Bach’s ‘Bourree’, the great teacher’s emotion knew no bounds. When the children’s performance was over, I went to Casals to thank him for having listened to them, but before I could finish, he threw both his arms around me and silently wept on my shoulder. How often I myself had wept at this beautiful, innocent outpouring of the children’s inner life force! Now the great eighty-five-year-old maestro himself was speechless in this sublime moment before the sound of that life force. Mr. and Mrs. Casals then went up on the stage, patting the heads of the children as they moved to the centre of the stage. Chairs had been put there for them. Holding the bouquet of flowers that the children had presented to them, they sat down. Surrounded by these sweet little Japanese children, and in a voice shaking with emotion, the maestro spoke into the microphone.”
Listen to the video: